There you stand. Eye to eye with the most feared and destructive urban legend ever alive. Godzilla. Standing next to the statue of this radiant reptile once and for all answers the question which nation is the greatest in downsizing: The country that miniaturizes seventy meters off brutality into half a meter of bronze. A country called Japan. It makes you wonder what they have done to those other giants, the Sumo’s.

The answer to this question is found a few kilometers Northeast of the Godzilla miniature in Ginza in a part of Tokyo called Ryogoku. In this neighborhood it becomes clear that the Japanese don’ stop at miniaturizing camera’s, cars, houses and monsters. They also shrink their mythical wrestler into a garden gnome. Cause once again you’re looking at a tiny statue. A Sumo wrestler caught in bronze of a size that makes you want to look around for Snow White and the other six dwarfs. 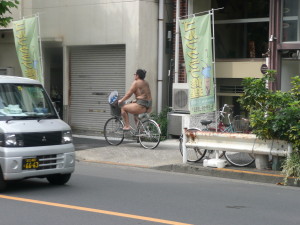 But instead of dwarfs, you’re bound to spot giants in Ryogoku. It being thé sumo district of Tokyo. Home of the National Sumo Stadium Kokugikan and numerous sumo stables. Walking the streets of Ryogoku is taking a chance to bump into half naked colossuses shopping for groceries, biking or taking a rest from their fierce training. Of course you can also find the giants working on their weight eating Chanko nabe at one of many restaurants run by former wrestlers. 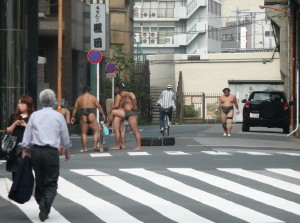 Sumo wrestling, according to a number of young Japanese, is making a comeback. The ancient sport gives teenagers a counterweight to balance their national identity that have suffered under the weight of decades of economic stagnation and a diminishing global role of their country. Many young Japanese take pride in the traditions and ‘looks’ of sumo, thereby giving centuries of history a future.

Spotting the sumo stables when walking through Ryogoku is pretty hard. With all its alleys and side streets, it isn’t too hard to loose direction. Picking up a ‘stablemap’ at a hotel or downloading it on your phone helps, as does some luck. Luck to catch the steaming gladiators taking a break out on the street in front of their stable and luck to see them nod at your humble question about the possibility of sitting in on their training. 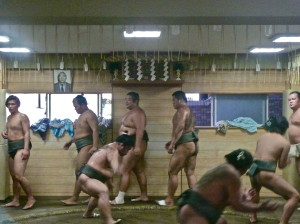 Once seated at the edge of the sand floor inside a nondescript building, you’ll be surprised by the speed and footwork of the sumo’s. These men take their training serious. They communicate without words. Practice their moves and bodies with deep concentration and fierceness. All for the ultimate goal: to win the Grand Sumo Tournament in the Kokugikan Sumo Hall around the corner.

To win a sumo game is to be one step closer to becoming Yokozuna, grand champion. To loose is taking a step backwards. This knowledge makes the earth tremble. It leaves you shaking when two enormous bodies collide in training, shocked with awe for these giants who guard a 2000 year old tradition.