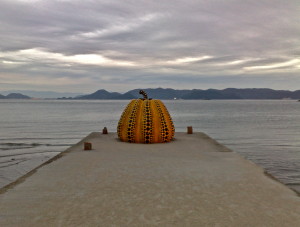 But even after multiple visits, Japan can take you by surprise, because it has more different faces than those of the 500 stone Buddhists of the Rakan-ji temple. So maybe it is not unexpected after all, when after the tranquility of Shikoku and the horror of Hiroshima’s past, you find yourself falling down a rabbit hole into a wonderland called Naoshima.

Naoshima is an island in the Seto Inland Sea. Once an ‘average’ fishing community, it has changed into an art nirvana by the hand of the Benesse company. Why? Because ‘Our fundamental aim is to create special places by situating modern art and architecture within the nature and the unique culture of the Seto Inland Sea, a landscape with a powerful cultural and historical resonance.’ 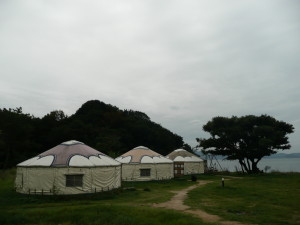 With this in mind, Benesse in 1989 (back then called Fukutake Publishing Co., Ltd. ) hired Japan’s star architect Tadao Ando to supervise the construction of the Naoshima International Camp, a place where you can ‘experience the natural landscape of the Setouchi area by staying overnight in yurts from Mongolia.’ That same year, Karel Appel’s Frog and Cat sculpture was the first work of modern art to be permanently installed on Naoshima. Many, many more would follow. 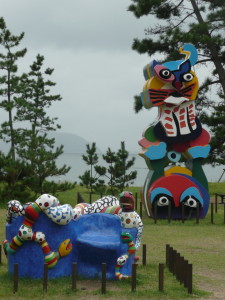 Fortunately, Benesse did not stop at collecting and displaying outdoor sculptures and setting up yurts. Its ambitions were and are not bound by any limits. The Benesse House with hotel guest rooms and spaces for exhibiting modern art was opened, followed by Ando’s Chichu Art Museum. An amazing place to “consider nature and people.” It is a dream which will ‘haunt’ you the rest of your life. An architectural gem built to house just 8 artworks: 1 series of 5 Monet paintings, an art space containing a Walter de Maria creation and three incredible mindblowers of the master of light, James Turell. 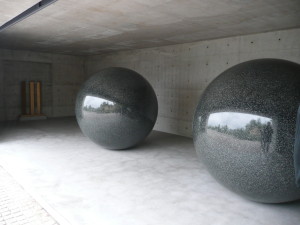 In addition to four museums (Benesse House, Chichu, Lee Ufan museum and the Tadao Ando museum) and the newly added art islands Teshima and Inujima, Naoshima also features several art houses. These former residences (and one temple) have been given by Benesse to artists and architects to create and exhibit their works or turn the whole property into a work of art, always keeping the fundamental principle in mind: ‘situating modern art and architecture within the nature and the unique culture of the Seto Inland Sea.’

For all who love art, Noashima is an enchanting place. A place that changes you. A place that makes you think like Alice in Wonderland: “I can’t go back to yesterday because I was a different person then.”