When Adam and Eva left the garden of Eden, they must have looked back and said to each other: ‘Das war einmal.’

Then, with sacking shoulders and tears in their eyes, they closed the gates one last time and walked away from 116 acres of trees and flowers.

Many, many years later, the paradise Adam and Eve had to abandon is fortunately still around. Contrary to what a lot of people might expect, it can be found in the thriving German city of Hamburg.

Not far from one of Europe’s largest harbors and even closer to the (in)famous, but quickly turning into a boutique store hotspot, red light district the Reeperbahn, you find your paradise lost. 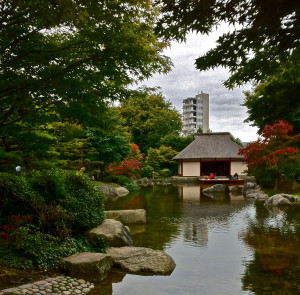 The Germans have renamed the garden of Eden into Planten un Blomen and planten un(d) blomen are what you get. And more, since the oasis in the middle of town hosts a Japanese garden, botanic greenhouses, small creeks, big ponds and a rainbow of colors.

The park is dotted by hundreds of white wooden lounge chairs that like a seductive snake seem to whisper: just relax, sit on me.

Would Adam and Eve still recognize their former home when coming to Hamburg? Maybe not since a lot was added to their garden after they left.

For kids the Germans added a wonderful playground full of ‘Bullerbergen’. Teenagers can eat their hard out at the giant open air roller skate ring and romantic couples and other people can from April to October enjoy the magical sound and light of the Hamburger equivalent to the Bellagio Hotel in Vegas: the ‘Wasserlichtspiele’.