waiving at the hand of god

It’s June 22, 1986. The Falkland War, just four years ago, is still an open wound. With growing tension, the world looks ahead to the next battle between two archenemies. This time, they take their fight to the Aztec Arena in Mexico City. Water and rocks have become green grass. Weapons and uniforms exchanged for national jerseys, leather boots and a black and white canon ball. No longer are a couple of isolated islands the center of conflict. Today the goal is the semi-final of the 1986 World Cup in Mexico. 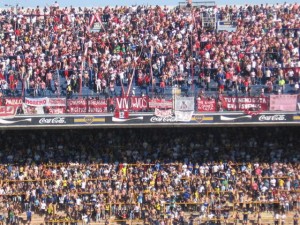 The game is six minutes into the second half. The scoreboard reads 0-0. Then, the moment the whole world will remember. Argentina’s prodigy child, the smallest man on the pitch jumps in England’s box. Time seems to shift into slow motion while Diego Maradona rises. Higher and higher, raising his hand to the heavens. And to the ball. Like a volleyball player he smashes the ball against the net. It’s a bullet to the head. For a moment the world stops spinning, a country keeps its breath. Then Argentina explodes. The hand of God is born. The healing of a nation has commenced.

To see, feel and hear Argentina is attending a Boca Junior game in Estadio La Bombonera. In this mausoleum of memories you can look into the soul of the Argentinean. And it is all just one question at you hotel, B&B or to your AirBnB host away: ‘Can you arrange tickets to a Bocas game?’ 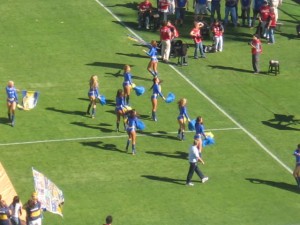 Though the social and economical situation in Argentina seems to change by the day, visiting the magic Bocas kingdom is something to prepare for. The safest way is to arrange not only the tickets, but arrange transportation at the same time. ‘Soccer is war’ is not such a bad way of putting it with regard to attending a Bocas game, and you should prepare for some heat and for a journey through seemingly endless concrete catacombs. But all will turn out fine as long as you act streetwise and don’t linger too long on what might happen when ‘the heat gets hot.’

If you have the chance, make sure you see the team bus arrive. This is a great opportunity to not only see the stars of the day, covered in gel and enormous headphones, but also to warm yourself to the enthusiasm of the Boca supporters. Enthusiasm that goes haywire when you are truly lucky….. 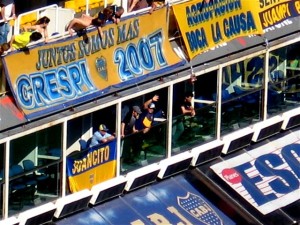 Waiving at the hand of God

….Cause attending a Bocas match, is a potential encounter with Argentina’s former wonder child, previously obese coke snorter, the black dye hair kingpin also known as ‘The Hand of God’. You’ll find out if the legend is around soon enough: When the crowd slowly starts chanting Maradona, Maradona his highness is sitting in his skybox only to come out when the sound has evolved into a deafening roar: MARADONA, MARADONA!!!. That is the moment a hand goes up into the air. That is the moment you are waiving at The Hand of God.