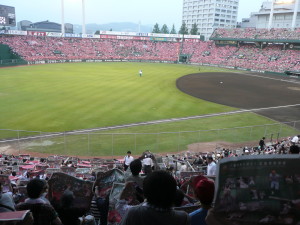 The setting has slightly changed since 2009, being the year the stadium said goodbye to its macabre neighbor to be reborn down the river. Other than this, visiting a Carp game in Hiroshima is still an experience of a lifetime.

Up to 2009, the Hiroshima Toyo Carp (est. 1950) played right next to the Peace Memorial. Its credo ‘Never again’, disappeared as quickly as the Enola Gay almost 70 years ago when you entered the concrete monster the Carp used to call home. 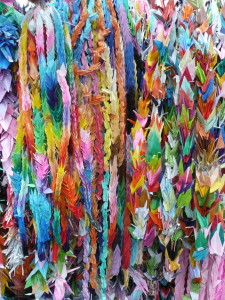 The contrast of standing at the serene Sadako monument at one moment to bump into a line of excited Japanese baseball fans the next moment, has evaporated since the opening of the new Mazda Zoom Zoom Stadium in 2009. Other than that, being part of a baseball game is an absolute must-do when you have the chance.

The experience already starts with the impressive cue-behavior of the Japanese. A cue is a cue. Even when you are waiting for a traffic light, you don’t cross the imaginary line between you and your fellow ‘waiters’. As everywhere, visiting an event, whether it’s sports, music, theatre or dance, turns out to be a peek behind the cultural curtain.

The Carp stadium is filled with Japanese ranging from 3 months to 97 years. Men, women, kids, business people, hipsters, grannies and salary men, the crowd is a near perfect representation of the Hiroshima population. Apart from the two gaijin that is, but it only takes the crowd a few minutes to adapt before they hand over balloons, red sheets of paper and smiles to the ‘foreigners’.

The balloons and red sheets of paper turn out to play a substantial part during the game, but not before, like with American baseball, food has set the stage. Unlike at the Yankees, it ain’t fries or Philly steaks that make up the menu here. No, of course it is ramen, udon or luxury bento boxes that together with the crowd enter the stadium. During ‘mealtime’, baseball cartoons are played on the giant screen and tension rises.

The best game to attend, wherever you are in Japan, is one where the local team plays against the Tokyo Giants. This team really gets a crowd going, enthusiasm that is further increased by huge mascot’s, organ music and the Japanese themselves. For over 3,5 hours, the audience sings, claps, makes noise with their plastics bats and perform North Korean like choreography acts with red paper sheets. The mass discipline of the Japanese is used to orchestrate an incredible show that builds up to a climax at the bottom up the seventh.

This is the moment the game stops and the stadium starts singing the Hiroshima hymn. When this powerful karaoke demonstration is finished, everybody starts blowing up a penis shaped balloon. Tens of thousands of colored phalluses now man the stadium, all of which are released at the same moment and make a hell of a noise when they fly off into the dark Hiroshima night thanks the built-in whistles.

It’s ‘hanabi’ without fire. A sight you’ll not easily forget. Carp e diem next to the A-bomb’s memento mori. 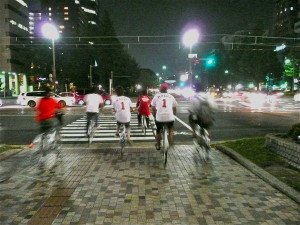