Yes, this is real. Spirituality, massive crowds and discipline. This is Japan in a nutshell. A nutshell called Meiji Shrine. Each and every year. On January 1st.

When the fireworks have dimmed out and the hatsu-hinode, the first sunrise, has set the tone for a new born year, hundreds of thousands of Tokyo citizens head for Yoyogi Park. Here, in the green lung of the steel and concrete body of this metropolis, you’ll find a sanctuary. A sanctuary of inner peace, walled by trees and about one million Japanese.

Step by step the giant crowd moves towards the Meiji Shrine. Without any problem whatsoever. After a couple of hours of moving in slow motion, you’re in a state of Zen. A state in which you are not surprised at all when you see crowd control Japanese style: two people do the job.

These two people each hold a sign and stand about 25 meters apart. One side of the side is green and shows GO!, the other side is red and reads STOP! When the furthest sign turns green, the 25 meters between the two crowd controllers empties out. When all people have left the space, the sign turns to STOP! while the other crowd controller turns his to green. About 1000 Japanese later, the space between the two sign holders is filled once more and everybody stops walking. Red turns green and the cycle starts again. Over and over until a million worshippers have reached the Meiji Shrine. All thanks to two people, two signs, two colors, two million feet and one soul. 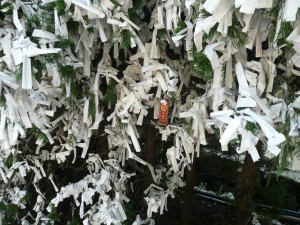 The ultimate goal of this Tokyo shuffle is not the shrine itself though. It is asking the gods for help and their blessing for the year to come. Fortune is what everybody is after and trees and shrubs are covered by a white, snow-like blanket of prayers written down on little paper notes.

When you have reached the front of the line, you’ll be welcomed by kindly smiling monks. They invite the worshippers to donate some ‘fortune for fortune’, the result being that it rains money into something that makes you think of Scrooge McDuck taking a billionaires bath.

Amazed but with good fortune in your pocket, you’ll leave the Meiji Shrine behind. Proud of how humanity can come together peacefully, full of hope and completely Zen.