the palace of sweets 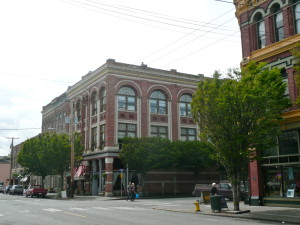 Once a brothel and nicknamed the Palace of Sweets, the Palace Hotel today is a charming place at the waterfront of a time capsule called Port Townsend.

Port Townsend was meant to become the largest harbor at the West coast. That at least was the plan back in the 19th century. But the world changed and Port Townsend didn’t. When the local economy started its fast and steep descent downhill, the town did not have time to reinvent itself. It was an unfortunate but fortunate development. For almost 100 hundred years nothing happened in Port Townsend. Nothing was built, nothing was demolished. Time simply stood still.

This lasted until the late 70’s when the beauty of a past captured in bricks and building was  re-discovered. Restoration came to town, touching the former brothel in 1976. 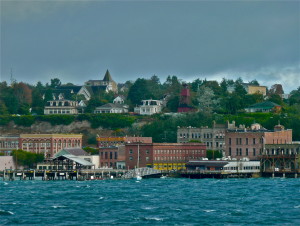 Work on the interior of the 1889 building constructed by retired sea captain Henry Tibbals, a.k.a. finder of a $68,000 silver treasure from a sunken Spanish frigate, city councilman, sheriff, postmaster and county commissioner, was completed a year later and the Palace Hotel opened its doors.

The fifteen hotel rooms bear the names of the girls who worked here between 1925 and 1933. An era that ended by a raid by the local sheriff – not Tibbals – in the mid 1930’s. The corner suite on the second floor goes by the name of the Madame during the ‘Palace of Sweets’ period: Marie. The other 14 rooms all bear the name of one of the other girls who worked here and are furnished with antiques and collectibles. 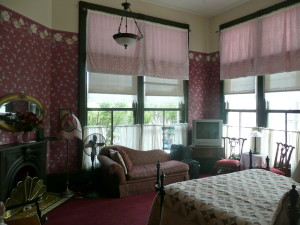 Marie’s suite is the nicest room of the hotel. The corner suite overlooks Port Townsend Bay, has a small kitchenette, high ceilings and is decorated in a Victorian way that takes you back in time.

Port Townsend itself is an excellent off-the-beaten-track-hub to get to Vancouver Island hopping over the beautiful San Juan Islands. But before setting sail to Coupeville and driving to Anacortes to take another ferry to Orcas Island, spend a day or two in Port Townsend and take a step back in time.