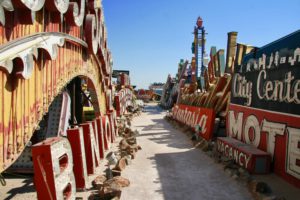 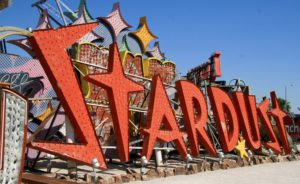 La Concha was one of the main attractions of the old Vegas. Of the Sin City era when one-arm-bandits spewed out silver quarters, the mob played Russian roulette with the law and of which Sinatra’s Rat Pack sang the soundtrack. That ‘good old time’ is no more. She has been blown up with dynamite and overshadowed by the bling of golden highrises. Old Town was put under a roof and at The Strip fantasies were built and fortunes made. In 2005 La Concha’s lobby was kissed by the wrecking ball. But not all was lost. Seven years later this icon of the space age architecture reopened its doors. This time not as a casino but as the entrance to the Neon Boneyard……click here for full article published in America Magazine issue #2 – summer 2017