a west side story

It’s a West Side story. A struggle between two groups involving love, hate and the threat of violence. A New York tale with a climax that makes you want to cry. Of joy.

The story begins in 1934. In the same decade a certain Mr. Cohen sr. opened New York’s sweetheart Economy Candy at the other side of town, a train made its first journey over the West Side Line of the New York Central Railroad spur. Many would follow, pulling wagon after wagon of produce, meat and mail into the Meatpacking District.

Forty-six years long, the trains looked down upon New Yorkers dwelling the streets below the elevated tracks. During these years the city changed. It seemed to switch places with the lives of its citizens. Putting on a grim coat of hardship, while the people left behind their lives of poverty and moved into the prosperous facade of the suburbs. New York became Sin City. Dark and rusty, like the tracks of the abandoned West Side Line.

For years the 1.45-mile-long elevated rail structure between Gansevoort and West 34th Street was an orphan. It aged without love, with no one interested in its beauty and history. Nobody but plants, rats and shadows of the past listened to its stories. Nothing but gravity and time embraced it.

View from the High Line

But after almost 20 years of neglect, the city’s eyes turned once more. And suddenly it saw the beauty of the iron beast. Changed itself, New York was able again to love the past. It began to understand that what a bright future can be built on the fundament of history. The city needed some help to see this though. It arrived in 1999 and was handed out by Joshua David and Robert Hammond, 2 neighborhood residents. 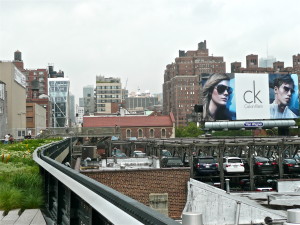 With effort, stride, love, companionship and plain hard works, all these Friends made the impossible possible. They made history out of industrial heritage. Painted a bright green smile on New York concrete face. In June 2009 section 1 of an innovative new public space, raised above the city streets, with views of the Hudson River and the skyline opened. June 2011 the second between West 20th Street and West 30th Street followed and efforts are ongoing to add a 3rd section to what has become one of NYC’s most acclaimed parks.

Like its musical counterpart, the High Line is a beautiful West Side Story. The only difference being that this time the end is a happy one. 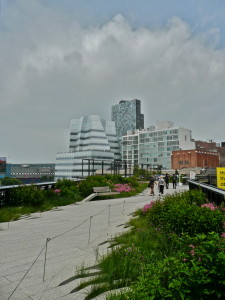