It’s nine o’clock on a Saturday. A mixed crowd has shuffled in. There’s an English graphic designer sitting next to you. Making love to his tonic before he starts to sing.

He sings ‘Son can you play me a memory’. And is totally sure how it goes. It sounds sad but it’s sweet. And his act is complete. When he throws out a Billy Joel pose.

Got the picture? Then you’re ready to get on stage in The Baby Grand. This is New York’s smallest and one and only gallery annex karaoke bar. And whether it is named after the 1987 Billy Joel – Ray Charles duet from the album The Bridge, or the 5’1″ Steinway piano that was first introduced in the 1930’s, the Baby Grand has set a name for itself over the last couple of years. 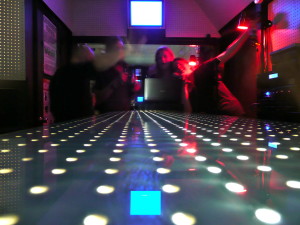 The tiny place – that describes itself being a very intimate bar + tiny gallery, carefully crafted to optimize the communal singing experience and share the many talents of our patrons – can be found on the border of SoHo and Little Italy. But since the latter has started its retreat into history some decades ago, the O Sole Mio’s have been substituted by All American classics, Bowie songs and the legendary ‘Chocolate Balls’ karaoke performance of Bruce, the English neighbor of The Baby Grand.

Before going on stage and hugging the mike, you browse the songbooks (click for the online version) at the bar, pay the bartender $1 for copy rights, take one more big sip of your drink and start working the crowd. A crowd that is always supportive and happy to make you feel like a real star, a King of Pop on 4 square meters of stage.