sleeping with the gods

A short anecdote to start with: Despite the fact he teaches English in high school, our conversation with Mr. Teacher is hard work for both him and us. But, like many of his fellow countrymen, Mr. Teacher does not give up easily.

Our conversation turns to the future of Japan from the perspective of an aging population. ‘Isn’t one of the solution you are working on in Japan the use of robots?’ we ask. Mr. Teacher looks at us with question marks in his eyes. ‘Robots?’ ‘Yes, you know, robots. Like R2D2, Star Wars?’ The question marks remain and Mr. Teacher starts to repeat this unknown word louder and louder Robots, ROBots, ROBOTS!!!! 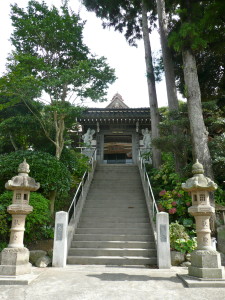 Our encounter with Mr. Teacher took place in Jofuku-ji, a temple at the coast of West-Honshu. The priest (or is it monk?) and his wife have welcomed us very warmly and have put very tasty sukiyaki on the table. ‘To share,’ he tells us. And sharing is what we do. With Mr. Teacher and a Japanese girl who is conquering the land on a motorbike.

For those of us who have always wanted to sleep with the Gods one night, Jofuku-ji is the place to be. Men and women sleep in different dorms, being 10 by 10 meter tatami rooms.

Jofuku-ji is situated in a very interesting part of Japan (what isn’t actually). Around the corner you find old silver mines, nowadays world heritage sites, castles, samurai villages and one of Japans biggest and most important Shrines: Izumo Taisha. For Japanese standards, the land around Jufuku-ji is deserted.

In the temple gardens you can relax while steeling glimpses of rice paddies and the sea. After 1 or 2 days at Jofuku-ji you are 100% Zen. Divine!