off the beaten railroad track

Kafka by your side

Finally! After days of walking around in what felt like a giant snow globe, downtown Prague is left behind. No more sugar coated medieval monuments on cobble stoned roads filled with tourists, now it is time for the edgy feeling of the borough of Zirkov.

To get to Zirkov from downtown Prague, the worn down Central Station needs to be conquered. This building is like an old movie star in need of a career boost. The inner beauty of the building needs to be brought to the surface again. To do that, a lot of work will have to be done and even more dust and pigeon turds has to be removed. 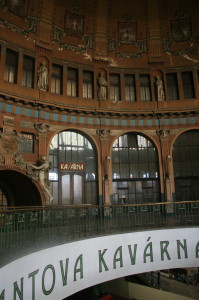 Contrary to what you might expect, the central station does not function as a bridge between two parts of town. Trying to get to Zirkov from Prague’s centre through the station brings you to a dead end. The only solution is to walk around the immense building, or do as many Praguers do: cross the tracks.

Together with some women with big plastic shopping bags filled with vegetables, we reach the other side of the tracks. We have arrived at our destination: Zirkov.

But Zirkov is not the end of our escape from the snow globe, it is only a beginning. A beginning of what is rumored to be a ‘Off the beaten railroad track’ that has been transformed into a bicycle and hiking trail. A trail that leads you through backyards and tunnels, over hills towards the outskirts of town which still breath concrete communism. A trail that is not only hard to find, but also hardly used. 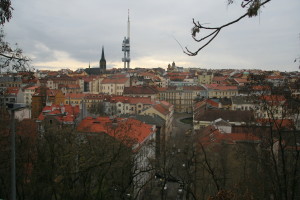 To get to the head of the trail, coming from the Central Station, you start by crossing the tracks. Just follow those ladies with the shopping bags or the commuters in business suits. Once you crossed the tracks, you pass a parking lot, cross the street and go left on Seifertova (towards downtown Prague). Just before you’ll get to the railroad tracks again, you’ll find the intersection with a street named Pribenicka on your right hand side. And almost directly at the start of that street, Pribenicka, you’ll see a trail that leads you off the road and into the trees.

You are now officially off the beaten railroad track and can start enjoying nature, history, looking at people’s laundry up close, enter both the 19th and 20th century, enjoy vistas of Prague and wonder how you could ever think Prague is nothing more than an open air museum.