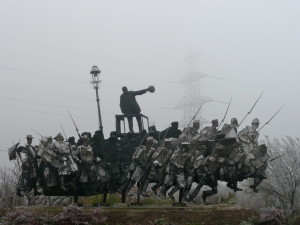 Fortunately, someone in Hungary realized that history has a better chance staying alive or being learnt from when tangible icons remain. This person must have remembered that one day he or she would die – memento mori – and who would then be left to tell the stories from behind the wall? 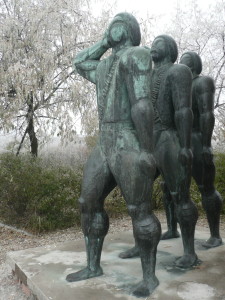 So instead of smashing, sawing, crumbling and melting, the Hungarians started saving, collecting and moving their iron clad memories of their communist life. Four years after the wall collapsed, on the outskirts of Budapest, Memento Park was opened. A park full of images of the past, memories cast in bronze, concrete, marble and metal.

There are several ways to get to this park of broken dreams and promises. Car, bike, bus or a combination of tram and legs. Tram 41 takes you along the Buda-side of the Danube in 40 minutes from Jugendstil to ‘Commustil’ to ‘the end of the line’.

This is where you get off, cross the road and take a left turn. After 200-300 meters a path into the forest appears on your left hand side. You follow the path until it gradually narrows and then you follow it some more, always going straight on (more or less). After about 20-30 minutes you’ll walk into a small neighborhood where you walk 50 meters to the right after which you turn left near a garden center. Five minutes later you see a massive bronze figures rising up in the air. You have arrived.

With some Russian marching music in the background, you pay the cashier 1500 Forint (about 4 euro). Next you are standing between the most impressive collection of Soviet and communist art you have ever seen.