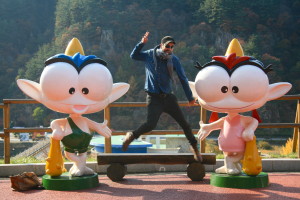 Without a car it is almost Mission Impossible to get to, but for those with wheels or willing to take a 3.5 hours bus drive from Seoul Gangbyeon bus terminal to Jeongseon, followed by another 25 minutes on a local bus, it is definitely worth a visit: the former Cheon Po gold mine a.k.a. Hwaam Cave. Hwaam Cave is Asia’s largest cave. A massive subterranean cathedral inhabited by gold and silver goblins and bright colored clothed Korean elderly.

The arrival at the Hwaam cave parking lot is a promising start of a journey to the center of the earth. You are surrounded by little restaurants from which the scent of the Korean cuisine tries to lure you in. Resisting is no option, so add an additional 30-45 minutes to your itinerary when visiting the mine.

Once filled with veggies, noodles, kimchi and more kimchi, the visit to the mine can commence. You have two options to choose from:

1. Walk about 700 hundred meters uphill
2. Listen to your belly, pay 2000 Won and board the monorail

A few minutes later you have arrived at the top of the magic mountain. A mountain with golden veins and a heart of stalactites and stalagmites. Before you, and the inevitable flock of candy colored Koreans, enter the old mine, you’re warned that for the next 1803 meters or (at least) an hour and a half, toilets are non-existent.

After this pit stop, you are safe to enter the mouth of the monster. Once a dragon guarding a golden treasure, Hwaam was operated as the nation’s fifth-largest gold mine between 1922 and 1945. The several routes that take you through the pitch dark tunnels actually take you to some of the reaming gold veins. But before you get there, you for sure have tried one of the life-action pneumatic drills that have been set up to let you ‘get a piece of cave.’

Walking deeper and deeper into the mine takes you past a couple of exhibitions of the history of the mine. You can see the miners work, blow up stuff, eat, drink and sleep. It is a sweet sight but can also be confusing for visitors who have been to Haesindang Park before coming here and saw the same statues in a very, very different pose…..

Walking on you’ll find yourself standing at the top of an endless golden stairway. It leads you to the golden cathedral, the heart of the mountain, the largest cave in Asia. Descending you might want to keep an eye out for fire, dinosaurs and turtles. Cause nature has been kind to us here, giving away stony presents in all kinds of shapes. 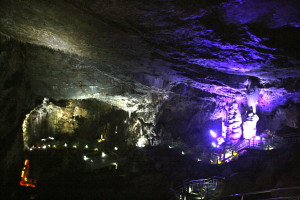 Before arriving at the holy of holiness, you’ll be walking through a land of goblins. These are the mascots of Hwaam Cave. They explain the history of the place and guide you and your smile to the next section: Gold World.

In Gold World you are blinded by tons of gold in all sorts of appearances. From mask to a gigantic stack of bars, all you see is gold, gold, gold. After this massive gold rush, you’ll finally enter the cathedral. Surrounded by stalactites and stalagmites, you are now standing in a 2,800 square meters large, magically lit natural miracle.