Japan, the year 1600. A Dutch ship named ‘De Liefde’ (The Love) appears before the coast of the island of Kyushu. Apart from one city, which name would later be written on one of the blackest pages in human history, the whole of Edo Japan is closed to foreigners.

Over the next couple of decades the Dutch slowly gain the trust of the Japanese, resulting in the exclusive right to trade with Japan from an artificial island which they were not allowed to leave in the bay of Nagasaki. The following two centuries, the Dutch were confined to this island, named Dejima, as part of the sakoku, Edo’s self imposed isolation.

Dejima, though completely embraced by the concrete arms of Nagasaki, can still be visited today. It is a fine and historical example of the special bond between Japan and The Netherlands. But the fan-shaped trading post isn’t the only tangible memory of the past. It has a younger but much bigger and bolder brother about an hour by train eastwards: Huis ten Bosch.

Huis ten Bosch (Dutch for house in the forest) is one of those theme parks you find on the site Atlas Obscura. It is not as insane as the Penis park in South Korea or as divine as God’s Magic Kingdom in Buenos Aires, but to find a 376 acres of Dutch village surrounded by mountains (a concept unknown to the Netherlands) is quite bizarre.

The park opened its canals on March 25, 1992 after a construction period of over 5 years. Since its opening Huis ten Bosch has had its share of blowbacks, but like the motto of the Dutch province Sealand which was flooded several times, Huis ten Bosch always did ‘Luctor et Emergo’. 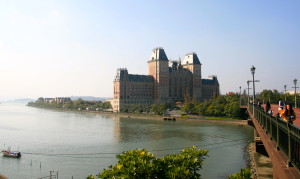 Visitors who arrive by train will first see the massive Okura Hotel, a blown up replica of either the Amsterdam Central Station or Rijksmuseum. After entering the park (5,600 Yen for an adult, 4,400 for a child) and strolling past some windmills and canals, the first thing you’ll enter is, not very Dutch, the Teddy bear museum. After setting free the bears, you find yourself standing in a bewildering replica of a Dutch city, surrounded by brick icons from all over Holland. The Amsterdam Concertgebouw, Utrecht’s medieval 105 meter high Dom Tower, the fairytale like city hall of ‘the home of the cheese’ Gouda and, of course, a replica of Huis ten Bosch, the palace of (former) Dutch queen Beatrix. 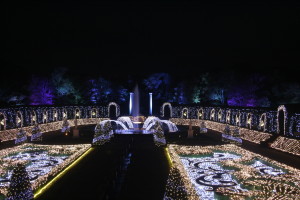 The 17th century palace was copied with permission of the Dutch royal family. At least, the outer walls and garden. The permission didn’t cover the interior. It turned out to be a blessing in disguise. Instead of a craftsman who could recreate 17th century images, the Japanese made a bold decision; they hired Dutch painter Rob Scholte. Scholte came up with a 360 degrees, 1200 square meter artistic explosion: Après nous le Déluge.

Après nous le Déluge was a statement by the French Madame de Pompadour to King Louis XV after the French army was crushed by the Prussians. Scholte choose this title for his creation to point out the continuous uprise of wars, battles that crush nations and scar generations, a concept very familiar to the city of Nagasaki. The sad thing is that the artist himself became a victim of violence. In 1994 Scholte’s car (most likely by coincidence) was bombed. Losing both legs, the artist had to postpone work on ‘le Déluge’ and could not meet the deadline of August 9, 1995, the 50th anniversary of the atomic bombing of Nagasaki.

Apart from this wonderful piece of art and the splendid replicas of historic Dutch architecture and city planning, Huis ten Bosch offers hotels, amusement rides, horror (!) shows, 5D presentations, restaurants, a marina and even a residential area. In winter the whole park is turned into a Dutch wonderland with hundreds of thousands of LEDs, almost giving it the magical touch of the real Amsterdam.