In a city built in a bowl at 3500-4000 meters altitude you are literally high all the time. But it is not the lack of oxygen that makes a first time visit to La Paz an almost hallucinating experience. It is the city and the people that sometimes make you wonder what’s real and what’s not. 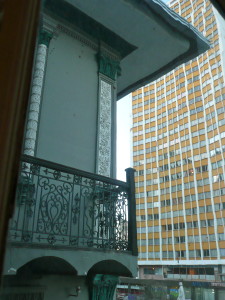 La Paz is a melting bowl of colors, architectural styles, smells, food, fashion and people. It seems like all the bowler hats that left London’s financial district decades ago found their way to Bolivia, switching the heads of British financials for those of Bolivian women dressed in rainbow outfits. These ‘mad hatted’ women work and walk shoulder to shoulder with fashionadas warming their fingers at a cup of steaming Latte.19th Century European style architecture is overshadowed by Soviet style high-rises. This continuous contradiction between styles, cultures, grey concrete and bright plasterwork comes together at the MoMa of La Paz: El Museo de Arte Contemporaneo. Here you find modern Bolivia, captured in painting, statues and other means of expression. A collection shown in a late 19th century building that was partly designed by ‘Mister Eiffel Tower’, the legendary Gustave Eiffel. Eiffel was responsible for the French style skylight of the museum. He was also the architect of the former train, now bus station of La Paz. A building that seems to have been airlifted from Paris and dropped in the Andes. Besides the work of France’s most famous architect, El Museo de Arte Contemporaneo featured a wonderful collection of Bolivian and international contemporary art.

The previously mentioned contradictions you find on the streets of La Paz, continue inside the museum walls. Besides French architecture in a Spanish colonial city, the exhibition of modern art in a here and there crumbling 19th century building creates a dynamic tension. A tension that is further increased by works with indigenous themes made with contemporary styles and techniques.

Climbing the many stairs of the La Paz MoMa can be a challenge 4000 meters up. But its a challenge worth breathing for.