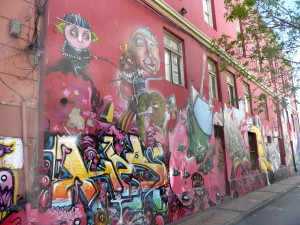 Valparaiso,
how absurd you are,
with your rumpled hair,
never,
you had time,
to dress,
life,
has always,
taken you by surprise. 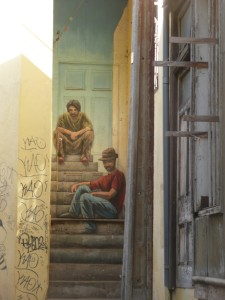 Over 50 years after Neruda wrote his poem, Valparaiso still seems to be taking life as one big surprise. Victorian jewels and Jugendstil gems went up in flames, the economy fell hard, got to it’s feet and fell hard again. But after each fall, the city rose again to finally become Unesco World Heritage in 2003.

Valparaiso, about an hour and a half driving West from Santiago de Chile, could be the sister of San Francisco. Hills, artists, cabled means of transportation, coffee bars and many free spirits. Valparaiso, like San Francisco, has it all. Unfortunately, the city also has an unprecedented number of dogs which have made it their habit to bake mucho brown cupcakes, preferably in the middle of the pavement. 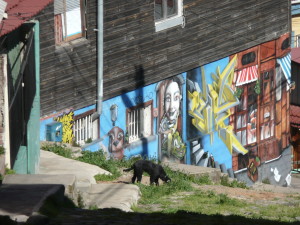 Fortunately, Valparaiso has something entirely else to offer as well. A gift for the eye and a bender of the mind. To start with, many houses are built in a beautiful Victorian style. But that is just half  the story as becomes clear when taking a second look at the buildings: wooden doors and window frames, stained glass, stone ornaments, so far so good. But then, instead of the usual bricks, plaster, wood or concrete you discover street after street made of corrugated iron. And since almost every house is painted in another (bright) color, the city looks like a giant colored jawbreaker. But the people of Valparaiso are not easily satisfied. Of course, it is nice to live in a city that stands with it’s feet in the Pacific. And they certainly do not complain about living right next to Chile’s famous vineyards. And enjoying Neruda’s poems at the end of another beautiful day, sitting on one of the city’s 42 hills with the sun dissolving into the ocean. Well, life is good but can be even better the Valparaisoneans thought.

So they took to the streets with brushes, paint and artistic intentions and literally painted the town, using it as a giant canvas. The result is an explosion of colors, graffiti and murals.

Valparaiso, how absurd you are.