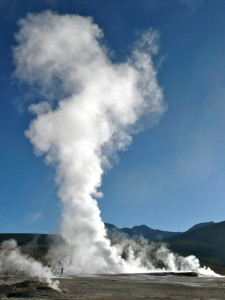 ‘Americans often started about Yellowstone. They say stuff like : ‘Yeah, you know. It is high, cold and it is Chile. But man, it sure ain’t Yellowstone. Like you know, Old Faithful. OMG! That sucker rocks your brain man. It squirts like a whale in heat….’’ The old guide eyeballs his shivering group of listeners and continues: ‘But hey, that is all in the past. Cause since a couple of years we have our own New Faithful here in El Tatio. Thanks to the Italians.’

The Chilean guide tells his story while small geysers erupt from his own mouth. In the distance, about two kilometers from where he stands, a column of water and steam a few hundred feet high points its hissing finger to the heaven. It is about 6 in the morning, stone cold and sky high. At 4320 meters above sea level, an orchestra of geysers plays their music every morning. Their audience being the mighty peaks of the Andes. 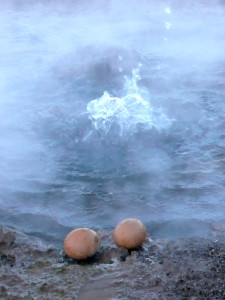 When at 7 am the sun starts peaking over the granite skyscrapers, shadows are born and crawl over the boiling and sizzling soil. They are attached to a handful of early birds. Diehards who got up at 3:30 to start making their way from San Pedro de Atacama to the border between Chile and Bolivia.

Two and a half hours it has taken them to travel less than 90 kilometers horizontally and over 2 kilometers vertically. But the pitch dark night and altitudes of over 5000 meters have not stopped them from reaching their goal: the geysers of El Tatio. The world’s highest and most ferocious steam machine. 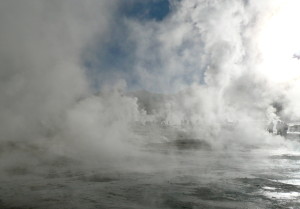 Visitors to El Tatio’s morning show often start the day with boiling a couple of eggs at one of its many geysers. All around boiling water and steam escape from cracks and holes in the mountain surface. Due to the high altitude, water boils at 85 degrees Celsius and eggs are ready to go in a couple of minutes.

At dawn the forces of nature start unpacking their stuff and all around miniature volcanoes and small to large geysers start to bubble and erupt. Not before long a curtain of steam comes down. Illuminated by the sun it gives the place a magical appearance. 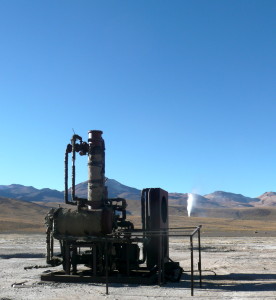 El Tatio is a very precious place. A place that is both powerful as it is fragile. Not too long ago this once again became evident when Italian engineers by accident drilled in the wrong place and set of a new geyser that since then has silenced American visitors about the Old Faithful.

The incident could only occur due to the fact energy is scarce and expensive, and Chile, looking for alternative energy sources, has set its eyes on El Tatio.

After a failed attempt in the sixties, a unique and delicate piece of nature once again is in danger of being turned into a giant steam machine. The guide stops speaking for a second, sighs and points at the New Faithful roaring behind him: ‘Would Americans do the same to Yellowstone?’