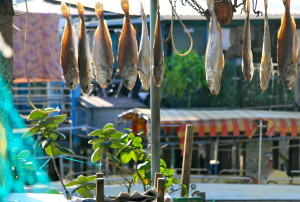 The island of Lantau houses both modern and historical entertainment sites. The modern one opened it’s doors in 2005 and is the home of our famous big eared friend the mouse: Disneyland Hong Kong. The older one opened it’s doors in 1906 and listens to the name Po Lin Monastery. Though in principle a spiritual place, the monks of Po Lin entered the world of entertainment in 1993 when they built the world’s largest (outdoor bronze sitting) Buddha next to their temple.

The enormous statue nowadays attracts hundreds of thousands of visitors, many of which make donations that have accumulated into a mountain of money, posing a problem for the monks whom are not seeking material wealth. The solution has been found in building another (quite blingbling) temple, right next to the old one. Problem solved for the time being.

But Lantau offers more than opium for the mind and spirit. When you take a cab (or bus or the Nhong Ping cable car next to the Tian Tan Buddha) to the Northwest part of the island (not too far from the airport), you get to what the Chinese, with a little bit of exaggeration, call the Venice of Hong Kong. It is the fishing village of Tai O. A village which is built on poles that continuously battle the tides and where life is still pretty traditional.

In Tai O its all about fish. Preferably dried fish although fresh fish is just fine as well to the villagers. Here you buy salted, dried and honeyed sea critters by the pound. Or you point at some of their saltwater brothers and sisters that live in plastic buckets, have them moved into steaming and boiling pots and pans, after which they land on your table in one of the many Tai O restaurants.

Besides eating dried or extremely fresh fish or looking at them in their plastic habitats, you can hop on board of a vessel for a dollar or 3 and enjoy the stilt houses from the water. The tour usually includes a short trip to open sea where you have a big chance of spotting some white dolphins, a natural wonder which is compromised due to all containers vessels and the international airport in the background.

To get to Tai O from downtown Hong Kong you can either take the ferry (to Discovery Bay or Mui Wo) or the MTR to Sunny Bay and change to either a bus or a taxi. Another option is to take the Nhong Ping cable car from the Po Lin Monastery to Tung Chung and transfer there to the bus, a taxi, or when you are up to some exercise; a bike.