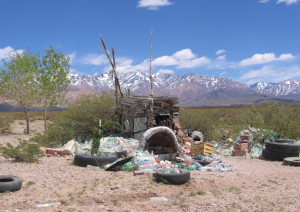 Evita Perron, the Hand of God and a short-legged legend to be, playing in Barcelona they already had when on March 13, 2013 the country gave birth to the new pope. It raises the question: ‘Is Argentina the new Holy Land?’

Everyone who has traveled the vast country will give an affirmative answer to the question raised. Yes, the nation has achieved a divine status. At least when you take into account the infinite number of shrines and altars you will have come across, not seldom accompanied by miniature garbage belts of plastic water bottles.

You find these shrines everywhere. From desolated desert areas to high Andes peaks. Most of the time with those bottles, but every now and then you’ll also notice car parts and license plates accumulate at the base of the altar. An altar which features a breastfeeding woman laying on something that looks like a floor. The whole thing makes you wonder” ‘What does it mean?’

The answer to this question can be found in Vallecito, a hamlet in the Province of San Juan, close to the prehistoric Valley of the Moon with it’s curious rock formations. You know you have arrived at Vallecito when you (coming from San Juan over the RN141) pass an altar of piled-up old cars…… After this strange sight, you’ll be blinded by smoke coming from crucified sheep being BBQ-ed on dozens of asada’s. You’re in the middle of nowhere at a place that looks like death but, according to the legend, is in fact the birthplace of an Argentinean Saint: Difunta Correa.

Difunta Correa was a soldier’s wife who, in the 1st half of the 19th century, followed her husband’s unit together with their newborn baby. It was love that made her step into her man’s footsteps, while it was death that, in the dry and rugged landscape, followed her. After days of walking through the desert, death finally caught up with Deolinda Correa (her mortal name) when she died of dehydration.

About a day later, passers-by find her body and witness a miracle: the baby is still alive, drinking from her breast. In the 150 years that have passed since then, Difunta Correa has performed more miracles and made wishes come true. For Argentineans plenty enough reason to set up altars and offering water bottles so she won’t die of thirst again. 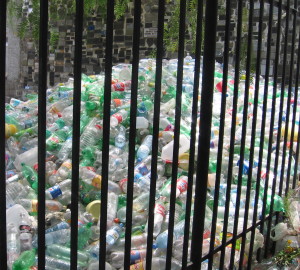 The mother of all Difunta shrines can be found at the presumed place of her death; Vallecito. It is a fascinating place. Totally extinct on weekdays, overcrowded during weekends. And it houses what must be one of the ugliest memorials in the world, a hard yellow and blue concrete fountain like thing that makes you want to cry. Other than that (and the BBQ-ed sheep) your eyes will be drawn to miniature houses, engine blocks, oceans of license plates, headlights, wheels, balls and other stuff that sort of paves the road to the exact spot Difunta died so many years ago. A spot that is almost covered in thousands of plastic bottles, left by pilgrims with a wish for a new house, a car, luck in love, a career at FC Barcelona or, perhaps, a top position at the Vatican