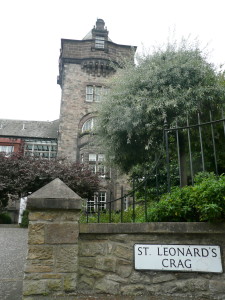 What would King Arthur think in case he were to take his seat on top of the extinguished volcano overlooking Edinburgh? First, he would be proud or embarrassed the Scottish named the place he is sitting after him: Arthur’s Seat. Second, he would notice Edinburgh had changed quite a bit since his last time around. Next to the famous Castle, the city built the Old Town, the New Town and a bit further down the river West End. And they drained the Loch that was used both as a source for drinking water and the city’s sewage. Most likely he would also set his eyes on the copper plated tower right in front of him, mistaking it for a castle before seeing the ESB insigne on the old grey stones, recognizing it for what the building used to be: the James Clerk’s High School, run by the ESB, the Edinburgh School Board.

It has been many years since Edinburgh’s youth roamed the hallways of The Old School. As students at least. Because the house of knowledge nowadays is home to Scots enjoying the good life. Classes have been transformed into lofts, locker rooms into condos and offices into studios, one being the Old School holiday rental run by a warm and friendly couple named Ewen and Gillian.

Ewen and Gillian have transformed their small Tower studio into a smart boutique apartment putting every inch to use. The apartment sleeps two people (and sleep you will since the bed is excellent and noise virtually non-existent) and is literally 20 steps away from the wild luxury wilderness of Holyrood Park and the cliffs of Salisbury Crags, which lead up to the famous peak of……..Arthur’s Seat.

The Old School is full of nice touches like virtual fireplace/aquarium, Bose docking station, flat screen TV/DVD player, books, DVD’s WIFI, kitchen, candles, washer/dryer, microwave, oven and so on. When you turn left leaving the historic building, you’ll not only find nature. A few minutes stroll will bring you to the architectural exciting Scottish parliament and the mini version of London’s Millennium Dome called Mother Earth. 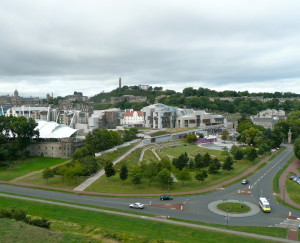 Around the corner: Scottish Parliament

Turning right when leaving the apartment takes you to Nicolson Street a.k.a. Clerk Street a.k.a. South Bridge, leading you in less than 15 minutes passed pubs, South Indian restaurants, fish stores and bakeries towards the Golden Mile in Edinburgh’s historic Old Town. Here you can either shop at the countless fridge magnet and made in China kilt stores, decide to have lunch or dinner at the excellent restaurant Angels and Bagpipes or walk on and visit the inviting Scottish National Gallery of Modern Art.

Whether you decide to go for some urban adventure or just take the travel rug and head out for a picnic in Holyrood Park, walking home over the cobbled street of St Leonard’s to go ‘back to school’ is much better than you expected it to be when you left high school years ago.

The Old School studio apartment can be rented through AirBnB. Still no AirBnB account and looking for a 20 dollar discount on your first rental, mail us your name and e-mail address using the contact form (click here) and use AirBnB as subject. We’ll mail you an AirBnB invitation in return which you can use to subscribe to AirBnB (for free) and entitles you to a $20 credit.