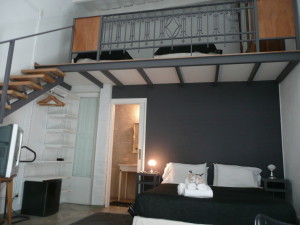 He must have one of the most beautiful names of Buenos Aires: Ariel Sonneschein. But nomen est omen does not entirely work for Ariel. Just when he finishes the extension of his Palermo Viejo Bed & Breakfast with a couple of suites, the Lehman brothers are kicked off their Wallstreet thrones and take down Ariel’s ambitions with them in their fall.

A year later Ariel is up on his feet again. Tourists are getting better and better in finding their way to beautiful Argentina. More and more of them start their journey through this great land in the swinging Buenos Aires borough of Palermo. The ‘Sonnescheins’ once again in Niceto Vega, Ariel’s B&B’s street.

But new clouds appear at the horizon and threaten to take the light out of Ariel’s schein: inflation, corruption and increasing fear of social and political unrest, something that unfortunately seems to be part of Argentina’s DNA. 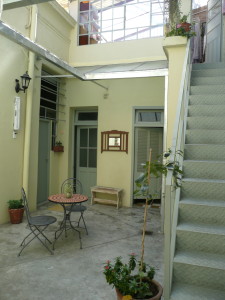 One of two courtyards

Gladly, many travelers don’t let this DNA-flaw stop them in discovering Argentina. As long as you don’t use the ATM’s, but dollars or exchange your greenbacks for peso’s on the black market, Argentina will treat you just fine.

But back to Ariel and his Palermo Viejo Bed & Breakfast. The B&B is situated in Niceto Vega, one of the outer streets of Palermo Viejo, Palermo Soho and Palermo Hollywood. The building used to be a little factory and has a small courtyard, a lounge area and tastefully designed rooms.

From the B&B you can really dive into all Palermo has to offer and best way to do this is on foot. In case you decide to get out of Palermo and go see the rest of Buenos Aires, the subway is around the corner, as are some big supermarkets.